Making do, exchanging, and farming methods.

A couple of weeks after we arrived in our new locality I tracked down all local suppliers of organic fruit and veg. Jean-Paul's place is a short bike ride away from us and his veg is simply incredible. He, his brother and mum have been honing their craft for the last 40 years here, sadly increasingly surrounded by monoculture as local farmers let out their fields to the big factory farm corporations. Their work is hard, and I know - or know fractionally - as we have been helping out a bit, but the satisfaction at the end of a day must be better than what the average factory farmer experiences.

Our farmer neighbour has decided to let all his fields to a massive supermarket-supplying company based miles away from here, so vast machinery is brought, the fields flattened into sterile lines, mountains of sand and fertiliser imported and eventually crops such as mâche (weird, small salad thing) are sowed by special tractors after which another wheeled machine puts in metal bowed struts, after which plastic is stretched over, (by machine) after which another machine punctures the plastic to inject a dose of insecticide/herbicide... and so on. It seems an awful lot of effort/waste/environmental damage so that people can eat tasteless small bunches of leaves (which most French leave on the side of their plate anyway). 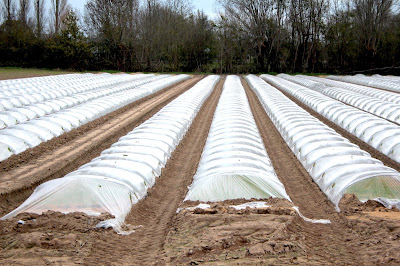 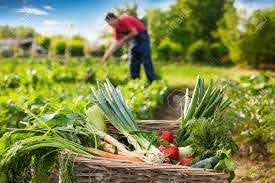 Not J-P, or his crops as it was raining when I went to take a picture

Recently, when buying veg, we mentioned we'd like to once again have chickens, after leaving 'the Gladys' at our old house (with the new buyers caring for them). Jean-Paul said there were four sister chickens available and so we prepared the hen area: a fenced pen and part of an outbuilding with an old sideboard re-purposed as egg-laying place with straw-filled fruit crates. Mark made a ladder out of found wood from the out-building's window down to their pen. The making do element was further extended to repairing the glassless window with one of those see-through plastic 'lampshade' dog collar attachments to prevent hound-extremity scratching. I was slightly peeved as I'd already re-purposed it as a leaf collecting device. A minor detail. 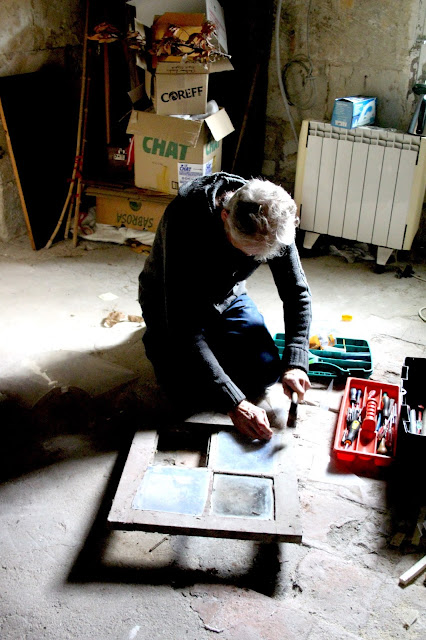 We went round to the farm at dusk when the chickens would be sleepy and he bagged the four up, literally into a large heavy duty potato bag and invited us in for an apero. We sat in their kitchen and drank herby spirit of some sort and discussed chicken behaviour, making ponds and the inevitable end of our particular civilisation. When retrieving the bag, Mark asked whether he would like cash or an exchange by way of work time. He opted for the latter and two days later we were pulling carrots in the sandy loam that makes up J-P's fields.

Carrot pulling is very satisfying; a gentle rocking and twisting motion but not too hard or the carrot will snap; then a determined grip on the top and out it slides sandily from the carrot shaped hole. Or not. These are highly organic legumes and a few develop into whole carrot citadels which take a little more work to extract. We filled wooden crates for two hours. Mark pushed them back to the farm headquarters discovering new muscles, after which I learned the art of broccoli cutting with a scarily sharp knife. 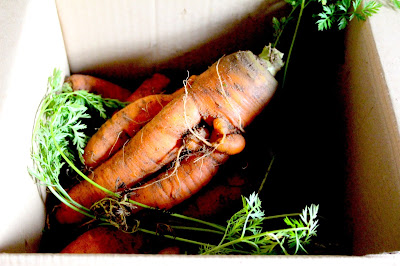 We left at lunchtime feeling happily tired with a bag of misshaped carrots, broccoli, and herbs for drying above the fire. That was just a few hours but added to the large amount of gardening later . . . well, we slept very heavily. I now regard carrots, broccoli and radishes (from a previous morning's work) with a different eye in supermarkets, thinking of the physical work involved, or in the case of the plastic bags of salad, the amount of machinery involved.

The chickens, being wilder than our previous flock, have ignored our re-purposed sideboard, outbuilding and window and have taken to roosting in one of the nut trees, as they did back at Jean-Paul's farm. And that's fine, although we may have to hunt the eggs as he does - alerted by the chicken's egg-laying song as he put it. Rather poetic.

Posted by writing and other stuff at 22:29