After being in our new house for a few months we have experienced a few cold days and can imagine what it might be like on a dank february day so for that reason recently went to a wood-burner shop in the local town and sort of fell in love with a small, cute red Canadian stove that was EEK expensive. On returning to the house and the room it would be situated in we justified the expense and went ahead to ask the shop owner to pay us a visit, survey the chimney situation and give us a quote. He did and the quote arrived a few days later - the sort of quote that requires the opening of a bottle and sitting down for some time in disbelief. Admittedly, the chimney is quite tall, and the tubage required no doubt very expensive as it was red to go with the stove, even though I'd said bog standard black would be fine...

We tried the wheely oil radiator for a few evenings but it's a big room and it barely made much impression so I looked at cheaper stoves and then somehow - as you do on the Net - ended up peering at electric 'wood' stoves. No lugging wood upstairs; click of a switch and heat would appear . . . attractive as we already have a big stove downstairs. Ideas change when one inhabits a new house for a while; things you had assumed about room usage don't necessarily stick. Case in point for this oversized bedroom. We had assumed it might become a species of second sitting room but all life revolves in and around the kitchen with afore-mentioned large stove. So, apart from sleeping and stuff and watching TV with hot water bottles (heaven) was it really necessary to invest a large amount of our savings on the real thing?

After looking at the electric stoves with a wry smile and raised eyebrow Mark agreed it might be the best option. I ordered it and the van magically appeared two days later. 'Will we be able to get it up the stairs' he had said as we went to sign for the box. I reminded him it had cost around 100 euro so was unlikely to be made of cast iron. The box was very much smaller than we had imagined. The 'stove' too - about the size of an average hotel mini bar. And it was made of plastic. Plastic! I'm sure the ad said métal noir - black metal. I just checked. It does . . . not sure how they got around that one. After laughing a lot and agreeing it was the naff-est thing we had ever bought we took it upstairs, screwed the legs on it and plugged it in.

The fire has a heat and flame option or a just flame option. The heat setting is actually pretty efficient and quickly 'takes the edge off' the glacial air temperature compared to the oil heater which sits greyly emitting a slight warmth after about half an hour. But the weird thing is how comforting the just flame option is. The mind, (or at least mine) appears to be taken in by this little flickering pretend grate of 'logs'. Even though I know our purchase is future landfill (and I am ashamed to have added to this nightmare - it almost never happens!) I'm happy to have bought it, happy to have saved an enormous amount of money, and even feel quite fond of it and its little whirring sounds. 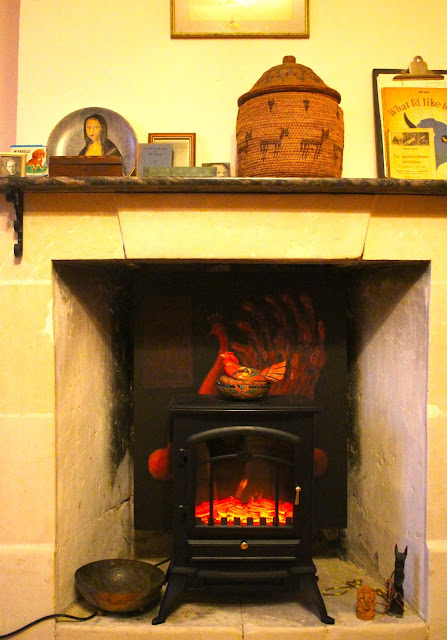 Posted by writing and other stuff at 09:48