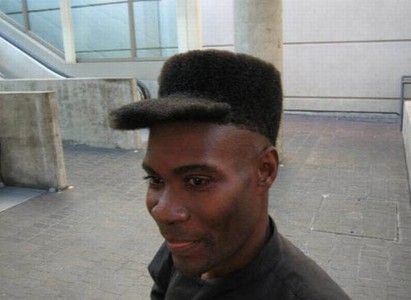 I don't know what to say other than how perfectly delectable.
Came across this on someones else's 'musing' blog, sorry to borrow your image . . . But I had to.
My hair is a continual mystery. About once a month I really like it; its just at the right point of fullness, sticking up in the right places, not too floppy and thin looking. Then today, for example, I have mad static hair which has developed a strange tendency to stray to the left.
I found an electric comb-brush-dryer thing in a cupboard left by a guest and attacked the hair with it. Worse.
Short is good, but the feel-good factor lasts about three days and whatever the hairdresser did eludes me as I try to recreate the style. The twenties bob thing was good, but high maintenance. The worst was definitely the perm I had, in the eighties . . . enough said. The weirdest was a white-blond teddy-boy quiff that somebody at a hairdressing school on Tottenham Court Road decided I should have. Dracula black made me look ill, and bright red was short-lived.
When I was about seven I had long golden hair but with sort of Rasta dreads underneath as I was such a tomboy. Since then its just kept getting shorter. Someone did offer me fifty quid at college to shave my head and be photographed - think it was January, and we lived in a student house with a loo that froze over, so hair seemed to be a good thing to keep.
Sometimes I cut my hair myself. Occasionally it works really well, but usually it looks as if rodents have needed nest material.
I do remember a brilliant Eddy Izzard sketch about hair and squirrels in the night, I might try and put in on here. Anyway . . . So back to today: short-ish with a vague aspiration to have a long romantic fringe that I can look out from in a mysterious way . . .
Posted by writing and other stuff at 10:46