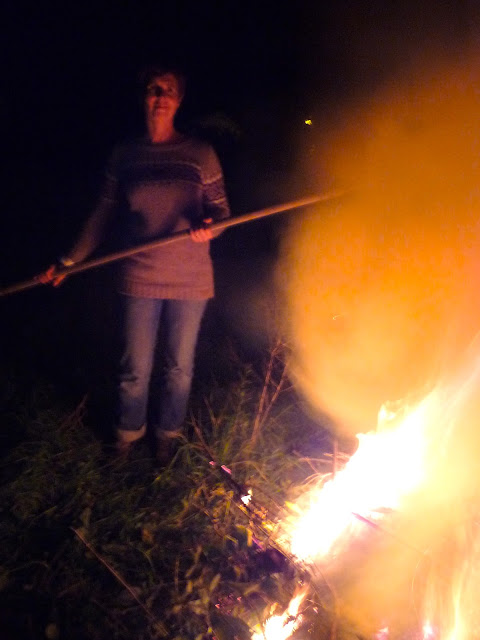 Actually I had completely forgotten it was November the 5th until friend Alvin asked what were we doing for it.
Since I had burnt the massive pile of garden trimmings the day before and Ezra is still scared of fireworks, I said 'nothing really'. In the end I made another huge pile of garden debris, Garth brought round some Leclerc fireworks which went phsssst rather than bang, thus not terrifying, and Mark made a super curry and parkin.
A fun evening which must have perplexed our French neighbours as no one burns their garden rubbish at ten pm. Left the fire to fizzle out and went back to the house to eat more cake; discovered that the dog had eaten it . . . Una who is now possibly nineteen and lives to hoover up anything edible or inedible.
I went downstairs slightly anxiously this morning, wondering if there might be a scene from 'La Grande Bouffe' but all was well. Just an old dog re-hoovering the floor for any vestiges of parkin crumb.
Posted by writing and other stuff at 01:15