Mmm. Surely Leclerc should have jumped on this one. End of the world in just a month! Never mind all the Christmas twaddle, what about a comprehensive range of DIY bunkers? - teak, corrugated steel, or cardboard economy range, and how about some nice survival kits: fois gras, chardonnay, and a couple of Laguiole steak knives to carve up your freshly trapped and roasted wild boar. 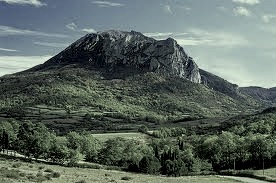 Bugarach.
According to an article I read this morning in the Guardian, many, or several, or perhaps one or two overexcited people think that THIS is the only place that will be saved when the time comes. I was surprised as I thought there were several noted places in the world to be constructing one's air raid shelter when the planet 'does the big firework', to quote Douglas Adams.
It's true; it is an alluring place. An odd shape as if scooped up, pulled out from the earth by giant hands and then patted on the top, flattening it off. Perfect for an alien landing strip.
When I drove back from Toulouse yesterday, I stopped to look at the mountain from a particularly good vantage point. It was capped with a long dragon-shaped cloud, the rest of the sky a luminescent opal green-blue; a strange shape so different from all the surrounding hills and distant mountains. I could see why it was and is the stuff of legends. The upside down mountain - apparently part of the lower layers of rock are younger than those of the top . . .
So the people of Bugarach possibly wait in fear; not from the coming of the end, but being swamped with thousands of people with one-way tickets from America, chanting maniacs, and horrible market stalls selling end of the world souvenirs? Who knows? Mark and I have decided to go and walk up the mountain again this weekend before it's too late - maybe collect some mystic sheep poo and sell it on eBay . . .

Following: a rather good quote from an inhabitant of Bugarach re the worry that hundreds of people may descend on the village in order to end it all.

"Why come to the only place on earth that will be spared the apocalypse if you want to commit suicide? Wouldn't that be a bit like trying to drown yourself wearing a lifejacket?"
Posted by writing and other stuff at 00:36