Once more into the box dear friends . . .

That odd time of year - after all the tinsely, twinkly stuff, now faced with a balding Christmas tree, drifts of needles and the dawning of a new year.
This morning I took the cards down and disrobed the tree, bringing out the cardboard box where all the decorations live throughout the year in the attic, apart from a brief couple of weeks. Sentimental - me . . . nah! Yes, actually. It's not so much the tree and all the bits, it's the memories of each Christmas, the buying of the tree, the gentle arguing about the best way of keeping it upright and then the searching for the ceremonial box with its bizarre and not-at-all Interiors Magazine collection of baubles and hand-made things.
A friend of ours over the road (hello Lisa) has a little extra family ceremony each December - the kids (now grown up) still go out with her and choose a new dec for the tree. I thought that was rather touching so we did the same. Our choice, the same as one of her kids - a small, glittery seal pup (nicely eccentric) in photo below - also in the picture, another old favourite: a 50s pink bauble from Mark's mother's old collection and a small festive cardboard house which was made by a friend's (hello Kim and Ella) daughter in the UK (now 25? or so).
I would never want to dispatch these oddities in favour of a themed 'this year's' colour or something else more tasteful; Christmas wouldn't be quite the same. 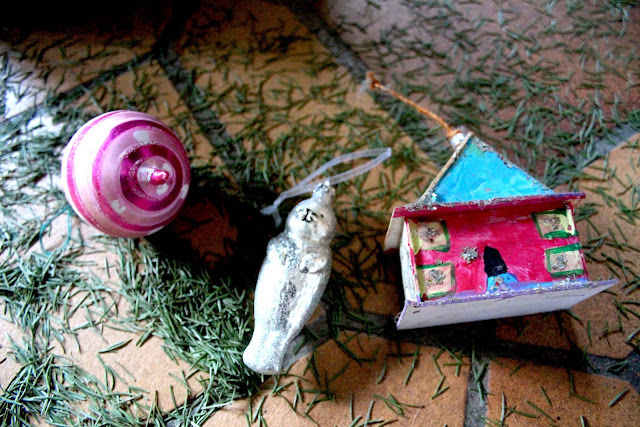 Posted by writing and other stuff at 02:54