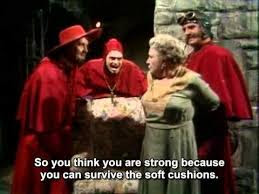 Our sofa is undoubtedly a pit of filth, and it will remain thus until at least the old dog shuffles off and the crumb-creating boy is in his own den of nastiness for at least most of the year.
I still cling (unwillingly) to the stylist ideal of tweaking the sofa here and there - to camera as it were, a throw placed over the worst bits, the cushions arranged just so, bit to the left, thanks, and another cushion just there, good - polaroid.
Cushions: womeny things mainly, I think. Scatter cushions, what a horrible phrase: brings back all those flowery sofas of the 80s with hundreds of meaningless matching frilly edged square fabric . . . things.
Actually, any decade come to think of it. Now it's rather more a line of anally-retentive beige/cream/brown cushions standing to attention on something leather and cuboid, with an occasional foray into something made of uncomfortable beads or impossible to clean corkscrewy wool that I can't recall the name of at the moment.
The cushions are very rarely used on our sofa. The boy throws them on the floor, I might stuff one of them into the small of my back when settling to watch a film, the runty dog might make a nest in the velvet brown one if no one's looking. Others include, two favourites from a vide grenier (boot sale) a few years back - absurd 1970's orange, mustard and black, washed almost to threads; two musical instrument patterned ones our cousins sent, two small useless red velvet ones the size of a seven inch record (if anyone can remember those) and yes, the brown one.
I plump them up every day when I sweep up before the day starts. It looks all right for a few minutes until it's covered with discarded coats, books, guitars, electronic projects etc. But I think to live in a house where the cushions stayed firmly where you put them all day might be a bit worrying.
Above, a still from a favourite Monty Python sketch, involving cushions oddly enough.
Posted by writing and other stuff at 01:47