lentils have no feelings

As far as we know.
Cows, chickens, pigs and other animals we choose to eat, do. So if we are going to eat them, they should at least have a good time doing what they are supposed to do before we kill them. I'm not a vegetarian, but I live with one, and for that reason we don't eat meat, except occasionally when the gatherer goes away not to hunt. Then I might buy a happy chicken and Ezra and I plus perhaps a couple of friends will delight in roast beast, followed by soups. stock, etc. A real treat once in a while, and because of being once in a while, really appreciated.
Ezra's school recently sent a leaflet round which stated that children - and people generally, must eat meat every day in order to remain healthy; it actually said that being vegetarian is dangerous for children . . .
When Mark and I went to the Doc's recently for an MOT, Mark despite being vegetarian, seems fine, just rather tall as the Doc noted. He hasn't touched meat for about eight years (Mark) and before that was vegan and even macrobiotic at some point. He is very tall and has huge feet which in themselves must take up quite a lot of calories to maintain each day, but he's good on veg and lentils.
Blood groups may play a part in all this. Mark may have once been a giraffe-type creature, gracefully pulling the leaves off trees, while I would have been something running about trying to sink my teeth into something else running about. I do occasionally get a craving for a nice juicy steak and will buy a bit. A bit, again that's all; no one needs to eat a sixteen ounce steak. 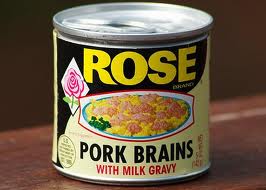 I was fascinated by all this 'horse in our beef' issue recently. Why is anyone surprised? In the 'developed' world we demand cheap meat, generally not really enquiring where it comes from. Why not horse anyway? of course it's the fraudulent aspect, but is eating horse any worse that eating cow? Meat seems to figure in most people's diets every day if the average French shopping trolly is anything to go by. Things are getting harder, and competition in the food industry ensures that manufacturers keep prices down.
I had a little look on the internet at battery farming and then wished I hadn't. We all know it's out there, but the reality is terrible. Good old Jamie Oliver, hope your reclaimed hens are enjoying their freedom.
I had to include this pitiful image of some pigs . . . just in case you are about to nip out and grab a bacon sandwich from a cafe. Pigs are highly intelligent creatures, hence why George Orwell presumably chose them as the eventual leaders in 'Animal farm'. They should spend their lives poking their noses around in strawy mud and eating lovely leftovers, having piglets, and then perhaps being turned into sausage; not stuffed into a cage without room to turn around, or if this pic is true . . .well, how inconceivably vile. 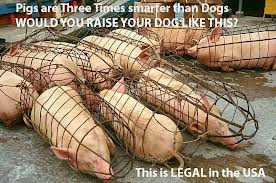 Posted by writing and other stuff at 04:22