We are all very different. Yes, true oh rambling one, and what of it.
I went for my usual quick nip round the field with the dogs this morning before the day started up and cast an eye over the familiar sights: the rolling blue-grey river, the bare vines, clipped and ready for spring, the distant rumbling JCB's where yet another load of houses are being built.
I passed a rubbly bit of ground that someone had cleared for a bonfire at the back of their house near the river bank, and noticed two old tree stumps, each one about ten centimetres round, then I remembered . . .
About three years ago, on the same walk in the summer, I recall standing in total awe of two fabulous trees: wispy leaves, slender boughs and the most extraordinarily exotic flowers. Yellow with dangling red stamens, they looked like something from a hot house in Kew gardens.
How divine that someone had planted them there with a seat underneath so that you could while away a happy few minutes listening to the birds and watching the light dancing on the river.
I looked the species up on the net - a paradise tree, how apt. 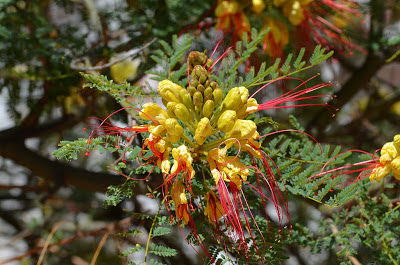 Every day for months, the trees were a wonderful sight as I came round the corner, waving gently in the breeze, dispelling any grumpiness within me about the day so far.  I started noticing the trees in other places - the plants of that year for me. I treated our garden to a small specimen, which, despite occasional icy Northern winds, has produced many flowers each season.
Anyway . . . I walked round the corner one late summer day to discover that some ******* had chopped both trees down - for no reason. The bench had gone and there was a small pile of rubble, the trees mangled. I could have cried, I probably did. They could have at least dug them up and given them to someone - me.
The walk was blemished as for several months, pathetic shoots would creep out from the stumps to be re-squashed, I couldn't bear to look anymore. The area became a bonfire for a while, then a general dumping ground, but I could never fathom why anyone would want to cut down such wonderful things. Maybe the person's father had planted them and they hated him . . . cutting them down an act of spite when the house connected to the patch of ground had been sold. Or they just found the trees too . . . untidy.
I'll ask them one day.
Posted by writing and other stuff at 05:23