How I hate it.
Having been involved with it far too long, many years ago, I still spend too much time looking at ads, thinking about what budgets they must have had and what particular trip some of the ad creators were on . . .
Ezra's award for the most pathetic French ads at the moment are:
One about blue cheese . . . Saint something or other - set in what appears to be a tropical rain forest. A languid, perfect-looking male model stands on a wooden balcony overlooking a waterfall. Rather than the wooden construction collapsing from termite damage as one hopes it might, it remains annoyingly solid while he lifts a piece of bread and stinky cheese to his beautiful mouth. An equally perfect-looking woman approaches in a smouldering, 'OK, let's do it' sort of a way.
Why would you eat stinky cheese before getting it on with someone? Surely some dew-laden strawberries or a luscious dribbling mango - and where would this cheese have come from anyway? Don't suppose there'd be a small convenience store just round the corner. Honestly!
The other ad of total bollocks is another little cameo story involving two more perfect folk, or possibly the same ones.
Woman clad in Persil-white bikini is lies on Conran shop sun bed outside a California-style beach house. Regulation stubbly, beautiful man arrives on speed boat, steps out. OK, they obviously have a cheeky plan judging by the woman's expression.
He's about to kiss her when his phone goes - and again - and again. The result being that someone is informing him of a half price sale on double glazing. I have no idea which company it is as my brain is now in total disbelief mode and is accepting no further information.
Woman drives off in speed boat looking peeved, and man turns to camera to inform us of the great deal . . ?
What were they thinking? How much must it have cost? Honestly!
Here is a picture of a 'Mr Bricolage' ad. They specialise in some of the very worst 'publicity'. I just hope the poor models got paid wheelbarrow loads of cash; how cringeworthy to have a picture of yourself pretending to DJ with a BBQ grill in your portfolio. 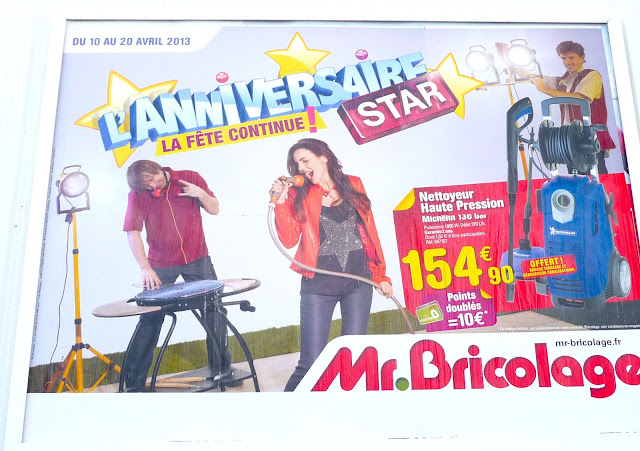 After going in Mr B we had to go into Leclerc to buy some dog food, and I was rather surprised to see this T-shirt: destined for a five-year old or so. Again, what were they thinking? Didn't anyone cast an eye over the English - French dictionary? Probably not. 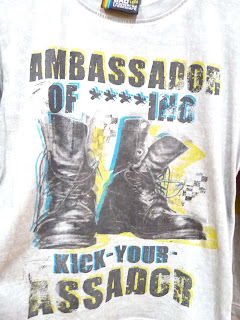 Ambassador of . . . cooking, obviously. What does Kick your Assador mean? Honestly!
Posted by writing and other stuff at 07:50