blog for a rainy Sunday afternoon

The weather forecast didn't say rain: gloomy grey blanket cloud-cover yes and sunny intervals . . . haven't seen one yet, and I've been checking the sky.
Nope - grey, varying shades of, and steady rain; 'set in for the day' as my mother always quotes her father as saying. Thinking weather, reflecting time, jobs done for the day and the house is silent without the sound of piano and bread tins rattling.
I don't think I've done a romantic-type post before, so here goes.
Before I met Mark we had both had our fair share of mess-ups: minor and spectacular and were deliriously happy to have finally stopped all that and got down to some serious stuff, so to speak.
I so clearly recall the first time I ever saw him - playing the accordion dressed in a stripy t.shirt; a trio I think it was, but I can't recall the other instruments. My mind was far too occupied forming a mental picture of him that I would then carry around with me for some time after.
Fast forward a year or two and we were living together: me, him and the accordion. It just clicked as they say. Yes we have niggles - I do wish he would put the electric toothbrush on its stand; he can get a little domineering in the kitchen - talking about cooking here, otherwise . . . err, nothing comes to mind really. He probably wishes I was a little less technology-phobic, maybe I ramble on a bit sometimes about plants or suchlike, but I can tell when he's glazing over . . . otherwise, nothing, as far as I know. Well, you can tell me dearest if there is, on your return.
Why does it work? Sense of humour: hundred percent important, same view on the world, music, art, nature, walking, the sea, our house and garden; letting things unfold without a plan as such, 'the boy' of course. I still carry that image of Mark in the stripy T.shirt and I still feel the same way. 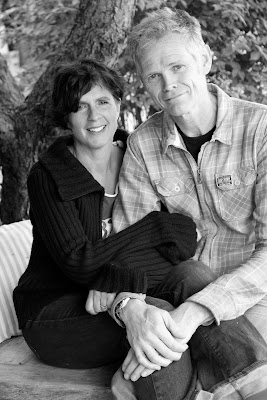 Posted by writing and other stuff at 05:24