When I was about thirteen we moved to Colehill, a small elongated village which is an offshoot of Wimborne. Actually, it's quite large, more of a comfortable splurge of a place, all well established cul-de-sacs, stocked gardens and neat roads interspersed with the odd thatched cottage or line of workers' houses from the turn of the twentieth century.
We lived in such a house in an un-made-up road facing an ancient piece of Dorset woodland with a view at the end of the road over the undulating fields and chunks of oak woods. 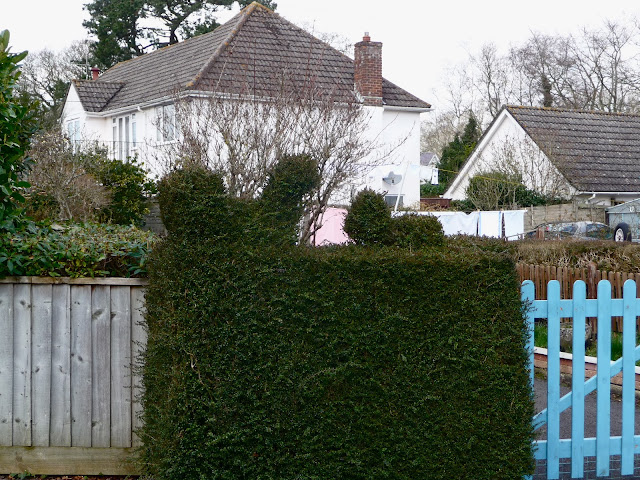 When I used to walk round to see my cousins, I would pass this box hedge and always stop to inspect the attempt at topiary. It's never changed over thirty-five years or so. The squirrel (I think) still stares up at the peacock? I don't think they are any bigger, perhaps a little, but the outlines are more blurred. Perhaps the hedge owner is now very elderly and cannot see to make precise cuts with the shears, or maybe the hedge has been passed to another family member who has never seen either of these beasts at close quarters; or possibly they are working on a plan to morph them into something else: a Viking ship and a poodle or that creature out of 'Eraserhead'. 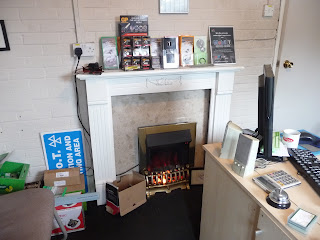 On the first day of my visit, I glanced at the documents in my mother's moss covered old Nissan Micra and discovered that the MOT had expired.
I found a garage and sat in their office for an hour while the mechanic toured the rusting car. I was intrigued by the office; it had a fake fireplace with 'real flame' electric fire jostled next to all the usual garage debris, and instead of knick-knacks, clocks or wedding photos on the mantlepiece, a selection of tyre pressure leaflets and old spark plugs. Oddly cosy. I could have quite happily sat there for several hours with some tea and a book.
After he announced that the car was beyond hope, or at least was going to cost a vast amount to repair, I sold it to him for a hundred quid, got a taxi back to the airport and hired the smallest car possible. I did wipe away a tear at the thought of the old car, but the memory rapidly faded at the realisation that the shiny replacement had power steering and a CD player.
On a rare sunny morning, I took the new car, or rather it took me, up to a favourite spot above Wimborne where I thought I might take a long stroll. It turned into a huddled two minute stagger peppered by noxious words from me as I encountered the thrashing East wind. I did stand staring however, as the blood retracted from my feet, at these incredible ancient oaks: the sheer size, the girth of the trunks, the graceful sweeping branches. In our drier (usually!) climate, the trees are relatively small: cypress, olive, almond, hardy evergreen oak and the sometimes lofty plane. These trees are immense, impossible to imagine that they grew from fallen acorns, or perhaps small saplings planted by someone several hundred years ago. 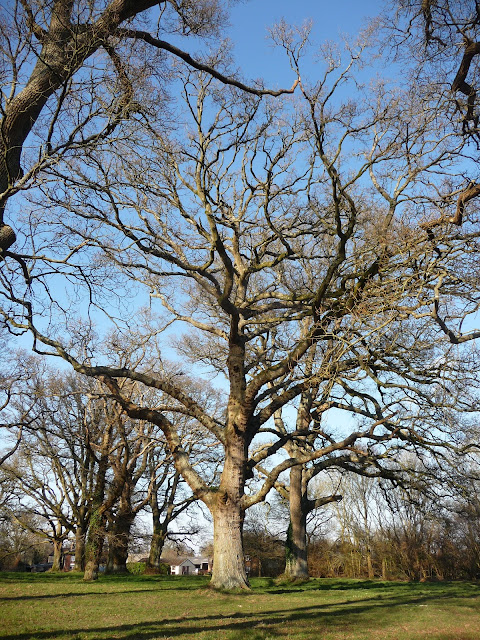 Posted by writing and other stuff at 14:34