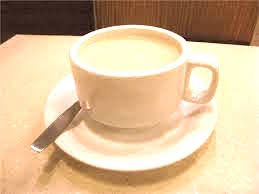 I think this is what our local annual huge wine festival should become, or they should move it in accordance with the changing climate pattern.
Toques et Clochers (Chefs' hats and bell towers) is Limoux's biggest yearly festival and put on as part of Sieur d'arque's (big wine producer) yearly auctioning of wines.
The event is held on a Saturday in March, which apart from on a few occasions is inevitably cold, grey and drizzly. Maybe it's just me but I find the idea of wandering about dressed in a fleece, clutching a glass of chilled chardonnay rather than a warm mug of something, not enticing.
I have been to about two T et C when the sun has been shining - this makes all the difference: warmth, street bands looking cheerful, terrible art a pleasure to look at, and of course 'la degustation' (tastings); a glass or two or five seems so much more attractive when you're not verging on hypothermia and clutching a hot water bottle.
One of the features of the festival is the art competition, which these days promises a handsome first prize of 1,600 euros! not to be ignored . . . I have won third and forth but not the hallowed first, apart from another category of 'painting in the vines'. I did win first prize but I think it was more to do with them being impressed that I had hauled a huge plank of wood into a field and sat in a howling gale for three hours.
Ezra (son) has won first twice in the children's category; this year, being eighteen and all, he decided to go for the big one.
After much procrastination he got down to the task, shut himself away and produced this lovely thing. I had it framed and dropped it off, knowing without a doubt he would gain at least 4th prize.
The week arrived and Ezra would ask nonchalantly about the post every day: 'did anything . . . you know, arrive?'
It didn't. So, yesterday, I braved the elements; drove, parked and walked a long way, thus avoiding standing about queuing for the shuttle bus, and paying for many tastings I wouldn't wish to carry out, as it was about six degrees.
I found the exhibition space and . . . well, I shall say no more other than I wonder if a certain amount of pre-tasting, tastings were undertaken before judging got underway . . .
I bought some chips, walked back to the car as bus-loads of fleece-wearing people were arriving, and planned what we both might produce for next years competition. 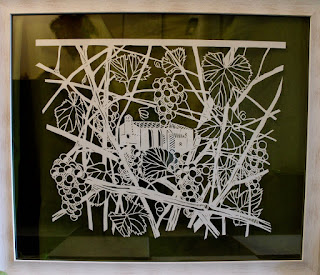 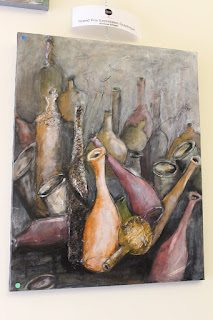 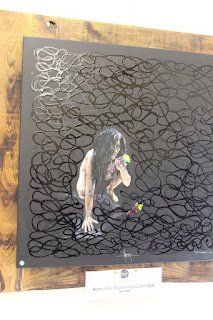