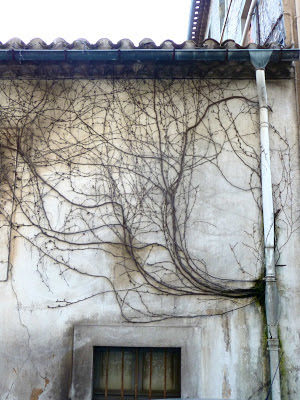 Ezra and I had a little trip into Carcassonne yesterday. Not to go round any early sales but to indulge in a bit of 'flânerie' or strolling, wandering, contemplating urban surroundings with no great purpose in mind. We've pretty much exhausted the Limoux possibilities, seen all the gardens, quirky gates and hand-bodged sheds. The train is now only a euro each way - hurrah for SNCF, and long may it last . . .  so, for two euros each you get a nice afternoon of observation including a cup of chocolate chaude for under a tenner: not bad.
Above, this enterprising Virginia creeper has made use of a broken down pipe and is growing avidly with the help of trapped leaf mould and water. 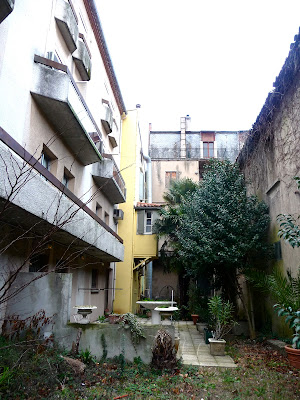 A bric-a-brack box of assorted buildings featuring a quaint turn of the century yellow town house, another taller edifice from the 30s perhaps, a rustic vine covered wall, and like a giant cubist ferry riding a wave of ugly housing from the 80s, this apartment block crushed into the space. 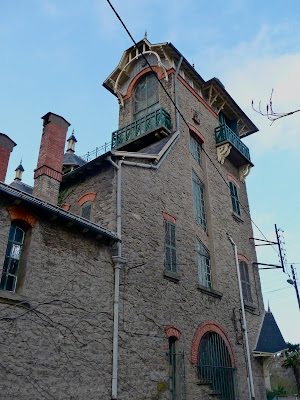 Ezra wanted to show me this fabulous house that he had seen from the train. We met an old man also looking at it. He said it was built for a wine trader and has now been bought by an American to restore. He looked up at the roof, shook his head and said 'sacré bulot' - yes, not something you would take on without a huge bank balance. Wonderful none the less. We shall return and be nosy when they have done some work on it. 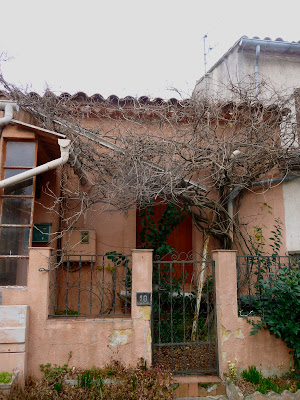 An empty? house in a side street near the cemetery. The once tiny twig of a wisteria has taken over, wrenching the gutters from the wall and covering the front door. Or perhaps the owners are even more interested than I am in having a wild garden. 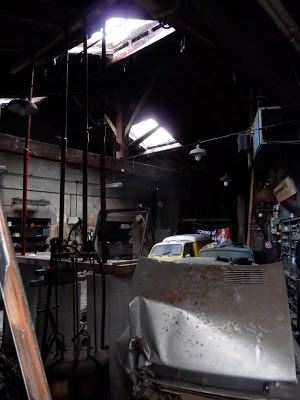 A garage near the station, seemingly completely abandoned, the roof held up with scaffold props, the tins of paint and tools rusting. As the newest car in there was a Renault 5. It must have been like this for at least fifteen years. 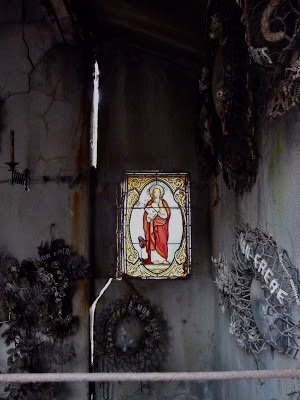 A stained glass window in a once splendiferous tomb in the Carcassonne cemetery.
Posted by writing and other stuff at 05:07