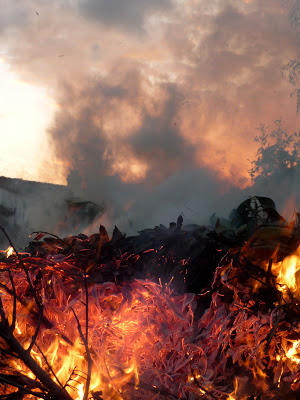 I never look at the list of things us menopausal women are going to endure. It's far too depressing. Well, I did look once, and that's why I know it's depressing.
Think there were thirty-nine possible symptoms . . . oh, go on, let's round it up - how about extra loud farting, or an inability to count beyond ten? Mm, maybe have that one already. For the last few nights I have woken in a raging sweat, not because of any exciting dreams involving cream cakes and Johnny Depp. The weather is frighteningly cold at the moment but it seems wonderful to lie with no covers on while Mark slumbers on under two duvets. Wonderful until I wake up again ten minutes later almost blue. This then continues, Mark heaping the duvets back on thinking I have mislaid them, me throwing them off and generally disturbing both our sleep patterns until Mark gets up at some vile hour and makes tea. I love him.
I wish I could reserve these powerful heat surges for certain times of the day. Like now. Our 'office' is bloody freezing. My hands are shaking with cold. Look, can I book-in a half hour of extreme mad surging heat so that I can do some writing without my brain freezing. Great, thanks.
Of course, my desired half hour surge happens somewhere completely different - in a busy shop, or, as I experienced the other day, in the queue to board a plane.
I had just put most of my clothes from my bag on my person in order to stuff my handbag into my other bag - possible tangent here to gripe about stupid Ryaniar bag thing . . . no, another time - a mega wave of heat announced itself.
It's an odd thing, something that men, bless them, and of course women who are younger, grrrr, could not comprehend. In my case, I receive a slight warning, a lesser heat - you have approximately five seconds to remove all clothing down to your underwear before you expire. It's impossible to ignore the following heat onslaught.
Anyway, I managed to get past the SS guard with my massive quantity of clothes as she was having a scrap with someone over a bag that wouldn't fit into the special measuring device, and walked into blissfully freezing air. Blissful until we then had to stand on the plane steps in a howling wind while someone couldn't find their boarding pass or rather, bit of ripped off paper that they had already shown to fifty members of staff in order to get that far. Put all my clothes back on, and then tried to take them all off again as my inner person decided it was time to rev up again as I reached the plane seat.
Posted by writing and other stuff at 00:40