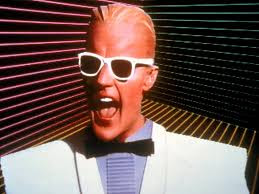 I was walking past our new local kebab shop earlier on and happened to look in the window. I suppose I expected to see, adorning the wall, a large, badly executed painting of some ancient monument with the azure med in the distance, nope - a giant black T.V screen. There is no bar or café in our town now without one of these. It's impossible to sit having a hot choc with a friend without gawping, mouth open at somebody going on about yogurt or the weather.
What is it about screens. My ex's parents always had their huge T.V on in the front room, so conversation was always reduced to: so . . . gosh Bruce Forsyth is looking so old these days. It's impossible not to look, to follow whatever garbage is being broadcast.
Remember this guy? from the good ol' 80s. I once went to the most stupid restaurant ever: the video café in central London and that's where I first saw him. There were screens everywhere, his face staring at you while you tried to remember how to read so you could order something to eat. I can't recall what I ate or who I was with, just Max Headroom. He was addictive in a slightly sinister way; I think I must have watched all the shows.
I like this comment from Mr Baggins on youtube.

Max Headroom is deeply disturbing. I always felt like he's a terrifying vision of what people thought the future would be like - totally synthetic and devoid﻿ of emotion. And there was always something about his character - there's a hint of insanity just below the surface of an otherwise shallow person. Can't tell if he was supposed to be a lovable eccentric and they just really missed the mark or if it was intentional, but either way it freaks me out.

About the same time I read 1984 for the millionth time. It seemed that the screens were indeed taking over; Big Brother telling you what you should be doing - advertising generally I suppose, then and now: Hey you, stop eating that, eat this, don't look like a dork - wedges are out, don't you know your hair should be a glossy auburn mane - because you're worth it, this toothpaste will make you a sex object, who needs sex when you've got this bar of chocolate . . .

How many screens of various kinds are in your house/car/bag? Scary!
'The Art of Noise' (video featuring Max Headroom that I had posted, and has now disappeared) were one of the things I did like about the 80's. Must go and dig out their albums while Mark isn't here . . .
Posted by writing and other stuff at 00:05