No use crying over it.

Spilt milk, burnt milk, burnt toast - reaction . . . dependent on the mood really.
This morning I whisked the pan off the stove and stood for a few seconds in silent contemplation of multi-tasking . . . or not in this case. Other days I would have jumped up, down sworn and booted the cat outside - always a satisfactory feeling, that. Ezra took over instead and howled after opening a packet of cereal onto the floor and finding ANOTHER hole in his sock, caused by a nail on the stairs. Actually, he never does swear, possibly in his head?
I often repeat the milk boiling over scenario. I put the pan on, bread under the grill and then go and check the weather/news online/ emails.
Today there was a lovely message from my brother (hello Adrian if you read this) which required at least half of my brain to reply to.
The other half was already wandering around aimlessly while trying to check off jobs to be done: trip to the Mairie at Campagne to see a man/woman about a concert space, someone's garden to attend to, shit . . . haven't done that letter, didn't phone my mother, how is Una so old - maybe I really should take her to the vet, God! look at the webs in this office, why didn't those B and B guests turn up after I spent most of Sunday cleaning and re-doing the terrace, I wonder if it's going to snow, maybe I should do the garden before going over to Campagne, why do rabbits have white arses/tails? surely predators must be able to spot them so easily, must get the reversing light fixed on the car, what's that chewing noise coming from the ceiling, oh Ezra's forgotten his phone again, my feet are cold . . . and so on: cue hissing noise and stove covered in milk.
I suppose everyone does this . . . do they?
There's a good film rendition of humans' flitting thought processes in 'The Weather Man' - Nicholas Cage crossing streets in Manhattan or somewhere, thoughts spewing as he dodges traffic. Great film.
Incidentally, the name Manhattan: interesting word . . . Oh, hello Wikipedia: derives from Mana-hata, island of many hills as written in 1609 log-book of Robert Juet, an officer on Henry Hudson's yacht Halve Maen( half moon). Yacht? Doesn't sound right . . . mmm — image of large white plastic object with shiny deck furniture. Rustic boat of some sort? Still what do I know of sea-going vessels in the 1600s. 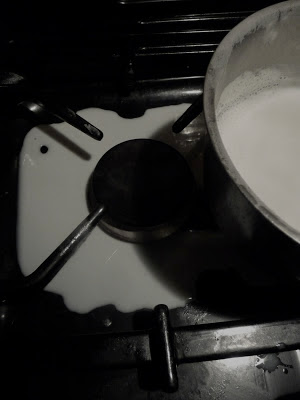 Nothing. Think I'll put the kettle on, when I've cleaned the milk up.
Posted by writing and other stuff at 01:03