Back in the days of shag pile carpets, I recall waking up on my birthday to find an oblong parcel.
"Oh thanks mum - that's fantastic!"
She had splashed out on a Panasonic tape recorder. Those of you who do remember the afore-mentioned floor covering will remember these too: black, with a row of press-down keys at the front: play, stop, fast forward, pause - if you had a classy model. Me and my friends spent hours of harmless fun recording farts and making up episodes of the muck-spreaders - my version of the Archers until the thing broke eventually and was replaced by a Hi FI system of dubious quality that we went to choose after hours of indecision in Jones Brothers.
I can recall the day well as it was Princess Anne's wedding day and all the staff were glued to the small bank of hissy-imaged TVs. Not like the average department store these days with more alert and barking screens than Jodrell Bank, and a fleet of bored shop staff to tell you all about them.
We take all this stuff so much for granted now and really have no knowledge of how any of it works. Well, I don't for sure.
The old record player I could just about understand: put the record on turntable (I only owned one album for some considerable time) place stylus on it and sound comes out of speakers. Now I can sit here doing this, checking my emails, listening to one of seventy zillion sounds on Spotify, open another window and check the weather, how to cook swede interestingly or see what any of my Facebook mates are up to, even if they live thousands of miles away.
How does Blogger work? I never really stopped to think about it. A friend just said one day, "Hey try this, takes ten minutes to set up, it's free - fantastic." I did, and it is. Thank you blogger who ever you are. I will never again whine when a photo takes more than twenty seconds to load up. What an incredible thing, unimaginable except in terrible B movies back in the Lava lamp years. 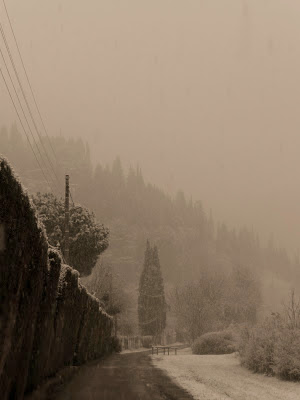 This morning the snow falls softly, creating that strange world of silence: no cars, no bird calls, just an occasional grunt as a dog turns over in its bed, and Mark nipping between piano and cake making.
I just checked, as I assume most bloggers do, to see who might be out there, either in another frozen part of the planet or perhaps in a searing forty-five degrees part, reading my rambling words.
Someone in that vast continent of the USA was up in the wee small hours reading a post of mine called 'night swimming'. Greetings whoever you are from this snow covered land. . .
Posted by writing and other stuff at 01:35