As I have said many times, the internet is a marvel.
I just put in Buddha made of cake and lo . . . thousands of images. Here he is, beautifully sculpted in marzipan by the 'Artisan cake Co'. 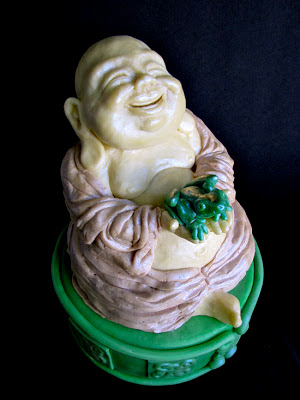 Actually I don't think it would be possible to push a knife into that particular cake; I think it would have to become a fixture in the house, gradually becoming a little more discoloured and stickier with each passing year.
I was thinking more of one of Mark's cakes. Serious cake: eggs, flour, raisins, brown sugar, sliced prunes, cream icing topping: whatever happens to be in the cupboard, and made with a skill that I still find extraordinary after . . . well, how ever many years it is. He doesn't do recipes: People ask for them, but they don't exist; he's an instinctive baker - handful of that, couple of eggs, a shake of this, oops bit much, never mind. They always come out brilliantly except the beetroot cake which was totally inedible. Even Madame post-Materialist couldn't think what to do with it other than go and buy a pig so it wouldn't be wasted.
So . . . what has this to do with meditation, I hear you asking as your finger heads for the little red 'close this page' virtual button. No really this has a purpose, honest.
Years ago in London I went to a meditation meeting, mainly because there was someone there I fancied at the time.
We sat in a large warm room with dim lighting, scented candles - an odd contrast to outside on Holloway high street with sirens screaming and buses snorting. I relaxed and listened to the person leading the meditation. Already it was calming, the thoughts of car clamping and props I hadn't found for the following day's shoot sloping away.
Everyone was passed a large fat raisin. We were asked to chew it very slowly, very slowly. To think about where the raisin had come from, how long it had been growing in the sun, who had picked it, where they lived. What was the taste really like: the sweetness, the texture of its wrinkled surface.
Then the actual meditation: counting to a hundred I think - stop each time something enters your mind and start again. Let everything fall away, just the counting. I could see how it worked but my busy brain wouldn't shut off from lists of things to do, things I should have done, things that would have to no doubt be done. It was the only meditation class I ever went to, but I do try occasionally, without much success, to apply it to my life today.
Yesterday I relived the raisin experience and will try and do this most days.
It was a grey cold day, clouds scudding, wind moaning around the walls of the house. I had stoked up the fire and had a sacred piece of 'Galette de Rois' in replacement of Mark cake, as he is absent from the hothouse for a few days. The runty dog came and sat on me and I stroked his silky fur absentmindedly as I consumed tea and cake, very slowly. Where had this slice of cake come from . . . probably some boring factory that supplies French supermarkets, mmm not so good . . . but still.
Sweet, soft flaky texture, hot tea, dog's smooth back, the hills - brown with a scattering of icing sugar snow on them, silence apart from a couple of rooks in the tops of the cypress trees, time marked by the logs on the fire disintegrating a little more with each second that passed. Ten minutes perhaps, out of an otherwise fairly busy day. Time just to sit and really experience just 'being'.

Posted by writing and other stuff at 04:35