Advertising and the cat food industry

I was feeding our cat some supermarket sludge this morning and suddenly remembered a particular cat food ad where the woman is obviously deeply in love with her feline friend. It is, if I remember a very attractive British Blue, but I wouldn't want to do other than tickle it behind the ears for a couple of minutes. The ad has an air of suggesting more.
Unless I am totally deranged (possible) I seem to recall her serving up the delicate plate - complete with a sprig of parsley - in some sort of negligee; mood music, come to bed eyes . . .
What the  . . . Cats were meant to guard the house against rats and mice, not be pampered with parsley; they're not even attracted to green stuff. Which reminds me. Why put carrots and peas in cat food? Padding obviously, and to make us gullible humans think that our beloveds would be healthier if they ate up their veg. Cats torture birds, not green beans: they rip flesh from bones with their pointy canines.
The very worst example of pet food industry product I saw recently was a 'Whiskers' creation for the extra finicky buggers - a purple plastic cat head-shaped food container. Arg! A cat's head. What twerp dreamed that up in the development meeting? How can they sleep at night. The landfill!!
'What did you do this week, darling?'
'I developed a purple cat head-shaped food container'. . .
Do cats respond to purple? Did anyone feel the thickness of the plastic for a portion of cat food about the size of say, a very small mouse, before they launched this absurdity.
The pet food industry must be one of the biggest money makers. Take noxious pulpy entrails, mix with God knows what? substandard cereals, sawdust? newspaper? package in tins with happy, healthy looking domestic beasts and . . . oooh look 500% mark-up?
Going back to our own feline: after nine years or so of trying to find something he will eat without flicking his tail in disgust, before walking away and a dog hoovering it up, I have discovered a range of tins in Leclerc. Basic beyond basic: white tin with a budget cat on it: rabbit or beef flavour at about 30 centimes! 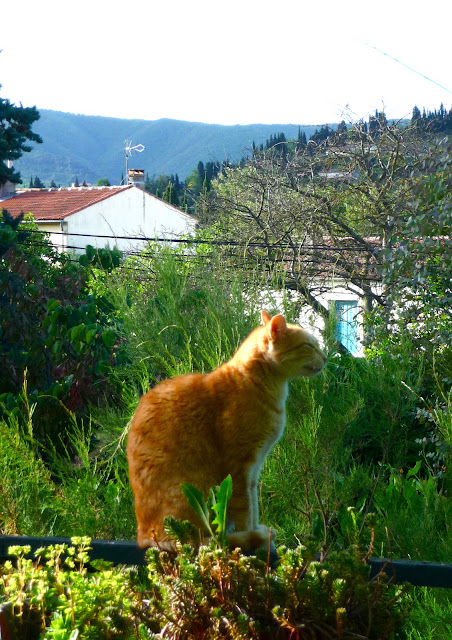 He likes it; he's liked it quite a few times. Same sludge as the posh stuff, I'm sure. So budget sludge, some crunchy things, some fresh off-cut meat, and some prey from the garden. At last I think we've got it.
Incidentally . . . the word negligee means 'négligé, literally, 'neglected'. Odd . . . thank you Wikipedia. Another one of those French words that I had never linked to its root meaning.

Posted by writing and other stuff at 22:06